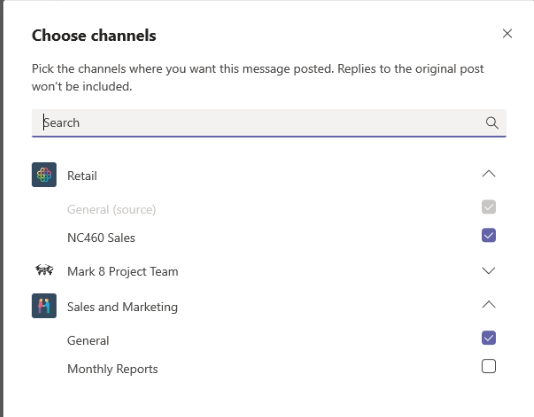 Microsoft is starting to roll out some new features for Microsoft Teams in now in July. This have been published both on the Roadmap for Office 365 and in the Message center for Office 365 administrators.

Update 11 July: Microsoft announced that this feature will be released later and not in July as first announced.
——
With this new feature you, as an author, will be able to post a message to multiple channels at the same time. You can post to multiple channels within the same Team or post to channels in different Teams. If you edit the message in the source channel this will also change in the other channels that you posted to.

This update will start to roll out mid July and should be rolled out to all tenants by early August.

When you want to tag someone in a message today you start with an @-sign and then you continue with their name. But now when you start typing a name of a Teams user you will get the suggestion to tag them without starting with @.

Simply start typing their name with a capital letter and then select the right contact from the list of suggestions.

This new feature will start rolling out in mid July and should be rolled out to all tenants by end of July.

If administrator don’t want all users to be able to post this feedback they can disable this with a policy.

This feedback feature will rolled out to all tenants by the end of August.